The initial condition of the Earth, following a moon-forming impact, was likely to be a completely molten state, and estimates of the melting curve for lower mantle compositions indicate that the magma ocean would solidify from the middle out, trapping about 1000 km of molten mantle between the core and overlying solid mantle, referred to as a  basal magma ocean (BMO). Similar conditions are also expected for “super-Earth” exoplanets, where more extreme pressures and temperatures compared to Earth would be even more favorable for maintaining molten interiors, or BMOs.

The material properties of molten silicates at these conditions also suggest they are electrically conductive enough, in addition to being within a rapidly rotating and convecting spherical shell, to allow for dynamo action.  Here, we present the thermochemical evolution of a downward crystallizing BMO overlying the liquid outer core and demonstrate the plausibility for this mechanism to generate the early Earth's magnetic field.

We show that for Earth, this silicate dynamo can sustain a magnetic field the first 1.5 Gyrs, at least, with durations of some models extending to 2.5 Gyrs while simultaneously satisfy other key constraints of Earth’s thermal evolution such as the present-day temperature and heat flow at the core-mantle boundary. Moreover, this model is not mutually exclusive with other alternative dynamo mechanisms proposed, such as Mg-exsolution of (O’Rourke et al., 2017; Badro et al., 2017). 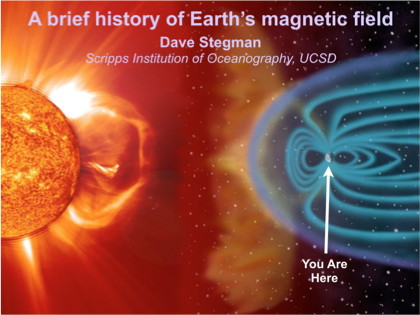